Rubocop is a Ruby static code analyzer. Rubocop utilizes a number of style rules, which it calls “Cops”, hence the name.

I picked a cop at random, and wanted to see what it looks for in my Ruby code. So let’s take a look at Parameter Lists

Here I’m going into my practice directory and making a new one. I then setup the directory to have RVM load Ruby 2.1.5 and the davinci_coders gemset. Next I need to add the guard-rubocop gem.

Next we need to bundle in order to install these gems. Then we’ll initialize guard.

Now we need to tell Guard to ignore the Guardfile.

We’ll fire up Guard, and we get no offenses. Let’s add a Ruby file called program_1.rb. 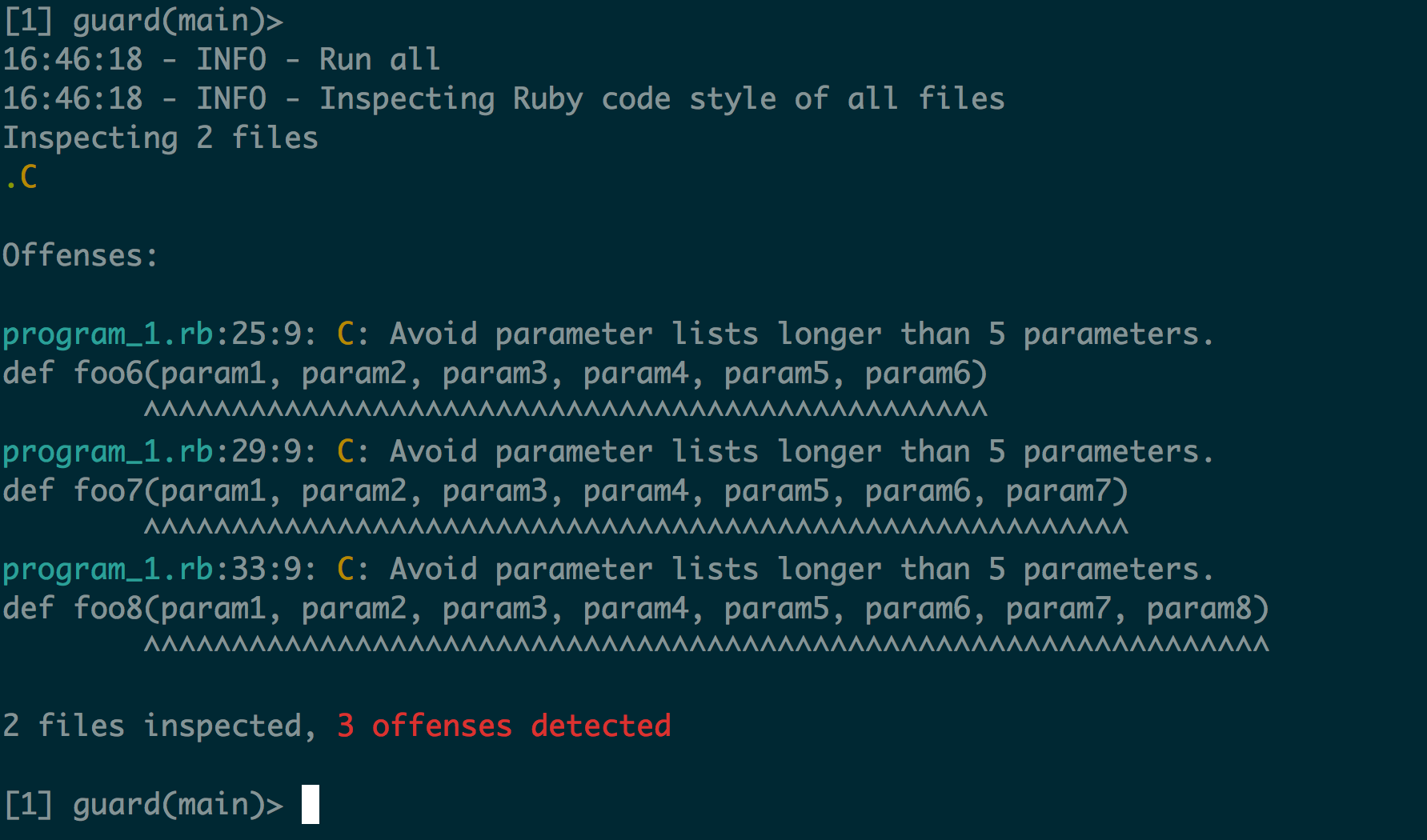 So it looks like Rubocop will complain if your method has more than 5 parameters. Looks like this preference comes from the Ruby Style Guide.

I’ll have to remember to have 4 or less parameters for any methods I create in the future.

Although, I could configure Rubocop to allow me up to 7 parameters:

Rebasing one branch onto another

Ok, I’m tired of looking this up, so I’m going to document it here for future me.

We have a branching strategy:

If this helps you, please let me know! 🙂

Changing Font Size in RubyMine via the Keyboard

A co-worker asked if RubyMine has the ability to increase/decrease the font size (say if you were presenting on a projector). I didn’t know, but I researched it and here’s how you enable font size changes.

Podcasts I listen to…

Recently, one of my students Raj Solanki blogged about some podcasts that he recently found.

For the past month or so, I’ve been listening to several podcasts. I listen on my iPod, but I’ve found the built in Podcasts app frankly sucks. A co-worker introduced me to Downcast, which is an alternative which ROCKS.

I plan to teach Financial Peace University in September

This podcast is hosted by Sean Devine, and he talks with people in the Rails ecosystem

This one is interesting, the episodes are < 5 minutes, and they give you updates on things going on in the Ruby community. This podcast is how I realized RSpec 3 had been released.

This podcast is put on by a Mentor and his Mentee, as they work through the apprentice coming on board.

These are both good podcasts on stories of American life. Recent episodes I enjoyed was “I was So High” and “Tarred and Feathered”.

I’m an Ruby on Rails instructor for the DaVinci Coders program in Louisville, CO. I teach a class called Building the Toolbelt of a Junior Ruby on Rails Developer, where we teach students how to use Ruby on Rails, as well as the other tools software engineers use in their daily work.

Recently, we started working on the group projects. The group projects are the capstone project where each student pairs with one or more other students in implementing a fully developed Ruby on Rails application. This provides students the experience of coding a project from scratch, including Inception, adding/writing Tracker stories, and collaborating with others.

The first project is Geoviz. This project is going to allow users to upload datasets to the site, and allow for the creation of graphs, maps and data display.

One of the gems that they added to the project was Rubocop, which they tied into their Guard via Guard-Rubocop.

I was amazed to see A LOT of “offenses”, i.e. “39 offenses detected”. This is an app that has nothing more than the output of “rails new _____”, so that was rather surprising. Here’s how we fixed it:

The next one we needed to solve:

We decided this wasn’t really that helpful of a test, so we disabled it by creating a .rubocop.yml file

This got rid of another 4 offenses.

The rest of the offenses were lines being too long:

One of my previous students, Ross Kinney recently blogged about an error he encountered:

It turns out that some of the OS X SSL Certs were out of date and he fixed it by running:

I had initially filed that away under “Good to know”, but after this weekend and yesterday, I’ve used this solution a half dozen or more times. Thanks Ross Kinney!

Updating requested_by for a bunch of Pivotal Tracker stories

I recently imported a bunch of stories into Pivotal Tracker via the Import CSV function. This worked like a charm, the problem was I wanted all the stories to be requested by a different user than what was in the CSV file.

I could use the web browser to do this, but that would take a while to update 85 stories.

I pulled out the Pivotal Tracker gem (Github | RubyGems) to see if it could help.

Note, I had to reload the project because the stories get cached by the pivotal-tracker gem.

[shell]
*** extconf.rb failed ***
Could not create Makefile due to some reason, probably lack of
necessary libraries and/or headers. Check the mkmf.log file for more
details. You may need configuration options.

After some googling and stack overflow answers that didn’t help, I ran across #20788, which referenced 9dd1c38 as a possible fix.

After this change I was able to install the mysql2 0.3.12 rubygem without issue.

Ran into an interesting issue at work today. My pair (Dave) and I opened a pull request yesterday and I checked the status this morning. It showed that Dave had closed it this morning. I asked him if he had intended to merge it, and he said he hadn’t closed it.

How do I turn off logging in Rails 3?

I have a script I want to run in rails console, but I don’t want to log the SQL and such. So I googled how to turn off all logging in Rails 3 console. Unfortunately, all the answers were old, so here’s how I did it: